I’m a little bit sad today. Twitter has today turned off v1.0 of their API. As a result of this my mobile twitter client, Hahlo, has also ceased to work just short of its 6th anniversary. Six years is a long time in the web world, I know a lot of things now that I wish I’d known back then - sure would have made many things a lot easier.

Twitter has changed a lot in that time, as have the capabilities of the browsers and devices being developed for. Simple things like offline storage and position:fixed were massive hurdles at the time, now we have them without having to think about it.

So, why is Hahlo dead?

Basically, Twitter have turned the old version of the API off which, as you can probably work out for yourself, means it no longer works. This affected pretty much every twitter client in existence, but the main difference being that many of them are still in active development, Hahlo was not and hadn’t been for a couple of years.

When they originally announced the plans for the v1.0 API retirement I investigated ‘upgrading’ Hahlo to use v1.1 of the API, but the changeover would have required much more than a simple find ‘1.0’ replace with ‘1.1’. An extensive reworking of the code was something I just simply didn’t have time for - especially considering that it had been a couple of years since I’d looked at the code, and it was neither very well organised nor suitably documented. Rookie error. So, the code didn’t get updated, and Hahlo was destined to die when Twitter eventually pulled the plug on the old API, which has now happened.

The beginning, the challenge.

Hahlo has been around longer than the iPhone, or any other iOS device, has even been on sale in Australia - and many other parts of the world. In fact the first two iterations of Hahlo were developed entirely without first-hand access to an iOS device. Big thanks to all those on the other side of the planet who helped test fiddly incremental changes as I made them and posted about them on twitter … using Hahlo, of course. The original concept, back when it was iTweetr.

Hahlo comes from a time before native apps were even an option. It was one of the original web apps designed specifically for - but not limited to - iOS. Development of the original concept was started on the day of the WWDC keynote in 2007 - in fact it is exactly 6 years to the day (depending on which part of the world you are in) that I posted the original concept.  A more ‘functional’ version that people could use followed a couple of weeks later. My concept also landed me on the front-page of Digg which was more of a ‘big’ thing back then than it is now.

Of course, webapps are still around now, but they are much less dominant than they were 5 years ago - despite what some corners of the web will still try and tell you. Mind you it’s hard to imagine such a time existed now that Apple have sold more than 50,000,000,000 native apps - god only knows how many of them are twitter clients of some variety (and of quite varying quality).

Hahlo is/was just 2 weeks short of its true 6th anniversary - and even though it hasn’t had any regular maintenance since 2009 it was still 90% functional (a few things had broken, and never been fixed, as the Twitter API evolved over time, most of them were minor).

In those 6-ish years Hahlo racked up:

It might have been conceived as an iOS-dedicated web app, but it was much more. It was truly cross-browser (user experience did vary…) with people using it in everything from Safari to Firefox to Chrome to Opera and even Internet Explorer - although I doubt the experience was very nice in IE.

Of course, as you’d expect iOS users made up the bulk of visits (about 60%), outside of that - somewhat surprisingly - there were equal amounts of Windows and Mac users (about 15% each). With the remaining 10% logging on using a variety of gadgets including: Playstation (PS3 and PSP), Blackberry, Nintendo Wii, Nokia phones, Android devices, Linux, Windows phones and probably any other device from the last 5 years that you can think of.

Made in Australia, but for the whole world.

Hahlo has had visitors from 198 countries/territories (according to Google Analytics) - The top 10 countries (in order) were United States, United Kingdom, China, Japan, Germany, Canada, Australia, Netherlands, Brazil and France.

Number 198 on the list was Vatican City with a solitary visit that lasted 1 minus and 36 seconds. Hello Mr Pope?

When Oauth was introduced for Hahlo v4 I even kept the old v3 site around specifically for users in China who couldn’t use v4 since they couldn’t authorise their accounts because Twitter.com was blocked. v3 and the much older version of the API it was using lived on for a little while longer but both have been dead for a while now.

@hahlo was twitter user 7,097,682 - now, 6 years later there are well over half a billion active users on twitter… not to mention  all the wonderful spam bots.

Hahlo was just the 28th ‘app’ registered for the Oauth API - the time when registration of apps with Twitter became required - there are now more than 4.5 million apps registered.

There were 4 major version releases - with a few smaller updates in-between - the last being v4.2 in May 2010 when I added the iPad layout. The original version was really just a timeline and a profile, by the time it reached versions 3 and 4 I think I had pretty much every Twitter API endpoint covered.

Hahlo integrated the Summize search (May 2008) well before Twitter acquired them and adopted their search technology as the default twitter search. Hahlo had ‘conversation views’ before (I believe, please correct me if I’m wrong) twitter.com had them. There were maps of locations, and oEmbeds galore in later versions allowing everything from YouTube to Flickr and more to display directly in your timeline long before the same thing became common place on twitter itself and other clients. It had Growl support, and even had mobile push notifications via the Boxcar service.

And in November 2008 when Hahlo’s growth happened a little too quickly for my original web host they freaked out and cut off my account, that was when the awesome people at Media Temple stepped in to help out. Hahlo hasn’t had an issue with hosting since. Version 3.0 (couldn’t find a good shot with the titlebar…) - introduced a refreshed UI and a stack of features 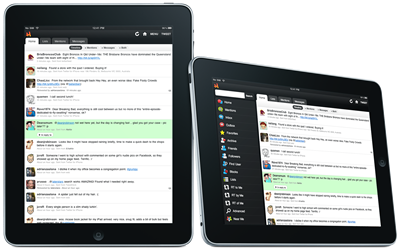 Version 4.2 for iPad - and the last update Hahlo received

Sticking it out until the end.

While traffic to Hahlo is just a faint shadow of what it once was - now just 4,500 visits a month down from around 300,000 per month at its peak (May 2008) - there have still been nearly 1000 active users in the last 6 months. I’m sad they now need to find something else, but I’m sure they’ll be ok, there are countless options available to them.

I’ve know this day was coming for a while, and although it’s a little sad, I’m not worried - nor should anyone else be - there are a ton of great alternatives out there. Twitter.com is a whole stack better than it once was, and there are great mobile clients literally everywhere you look, my personal preference (on iPhone, iPad and Mac) is Tweetbot but both Twitterrific and the Official Twitter clients are also pretty great options.

Thanks to everyone who used Hahlo, especially to those who helped with testing (for example, the Hahlo 3 beta had over 1,000 people taking part). Thanks to those who reviewed it and wrote about it - in 2008 John Gruber described it as his favourite third party Twitter web client. Thanks to those that talked about it on podcasts like TWiT, or recommended it to friends.
BIG thanks to those who donated a few dollars here and there - the donations were never going to make me rich nor cover the several hundred hours I spent working on it, but they did help with some initial hosting costs, plus caffeine and sugar to assist with the coding process. Massive thanks, again, to the awesome folk at Media Temple, without them Hahlo might very well have disappeared back in 2008.

Hahlo, you taught me many things. It was a little stressful at times, particularly for something that was really just a hobby project, but it was a lot of fun.