It has now been two weeks since I made all of my iOS apps free, and as expected they’re being downloaded more frequently than they were previously. But how much more frequently?

I didn’t announce the “freeness” of the apps until July 1st, but they’d actually been free since June 29th - I’d set the change to happen on June 30th, but timezones meant that it actually happened a little earlier than that depending where you were.

Why is this important? Well, because 56% of the downloads I’ve had since going free occurred in the three days directly following the change - and about 75% of those before I’d even posted the announcement article.

I can only assume that the change caused my apps to appear near the top of the “new free apps” list for a brief period of time prompting the initial spurt of downloads, and then the gradual decline as it dropped down the list.

The above graph shows downloads in the first six months of the year, the three days after going free, and the days after that up until now. Of course comparing three time periods of different lengths could be a little misleading, but I’ll get to that later.

Across the first six months of the year Criclive had been purchased 140 times (both versions combined, v1 priced at 99c, v2 at $1.99), in the two weeks since going free (and discontinuing v1) it has been downloaded 188 times.

In part this is due to the England v India test series starting, Criclive downloads have always shown spikes whenever there is an active cricket series or tournament in progress somewhere around the world. The difference now is that rather than that “big” spike being 10 or 12 downloads, it is 35 or 40.

Across the first six months of the year NextGame had been purchased 31 times (priced at 99c), in the two weeks since going free it has been downloaded 50 times, not as great as Criclive but better than it had been.

There is no apparent trigger for the increase other than the price drop.

Across the first six months of the year Watched had been purchased a miserable 8 times (priced at 99c). Eight. In six whole months.

In the three days after it became free it was downloaded 124 times, and all up has been downloaded 172 times in the past two weeks.

Like with NextGame there is no apparent reason - it’s not TV season - for the spike other than that the app is now free.

That spike is good, right? Not so much.

The above graph shows downloads (in red) compared to actual signups (in blue). What.

I may have only sold 8 copies in the first 6 months of the year, but they all signed up after downloading it. That signup rate has dropped below 24% for the 172 sales since going free.

The 124 figure for the first three days of downloads looks nice, then stick it next to the number of people who actually signed up (13) and it is almost as depressing as the 8 sales in the first six months of the year.

Ok, so that first graph compared three time periods of different length, and as such doesn’t tell the whole story…

If I reformat the graph, still keeping the same three time periods, to show an average number of downloads, the picture is a little clearer. 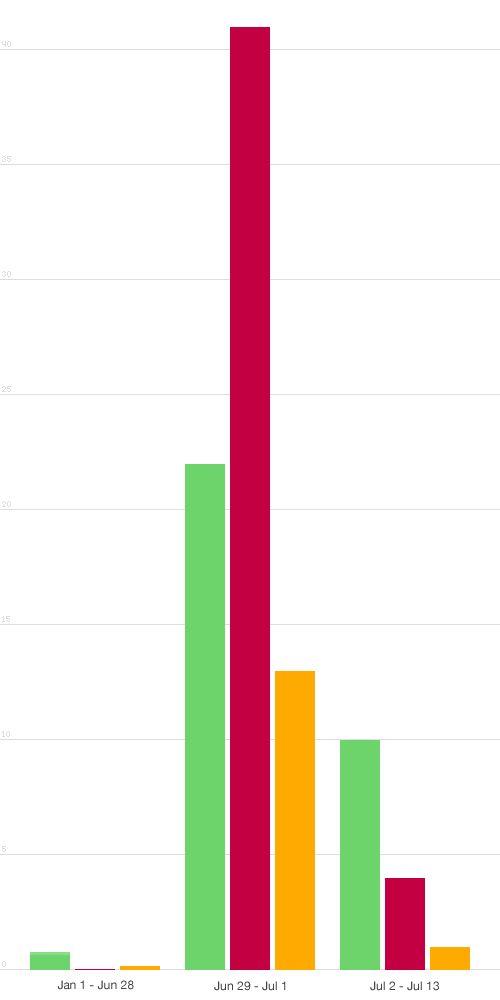