Apple has confirmed, as has been rumoured for weeks, that there will be an event on March 7th presumably to announce the iPad 3. The image below is from the invitation to said event and it’s got people all worked up for a couple of reasons. Firstly because it appears to be hiding the retina display in plain sight, and secondly because there is no home button shown in the photo. Oh gawd. 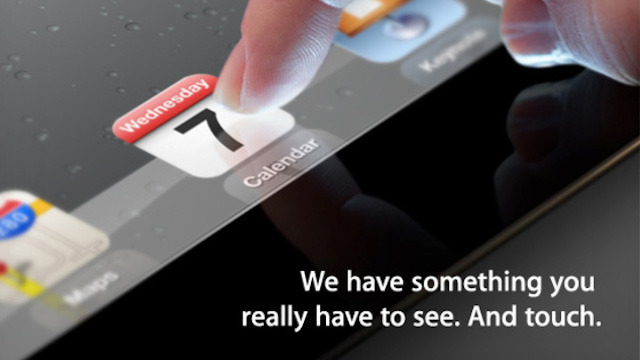 Ok, the home button. People are freaking out, comparing the above image with photos they’ve taken of their current iPad trying to show that the icon position and the water droplets on the homescreen background image all line up the same and that this definitely indicates that the iPad in the photo above is in portrait orientation and that then this definitely means that Apple has removed the home button. Oh my the world is ending. No it’s not…

Is that really a retina-equipped iPad hiding there right before our eyes? Maybe, maybe not. Look at the size of the finger in relation to the icons. Those icons are enormous. On my iPhone 4 my boney little fingers almost entirely cover a single icon, on the current iPad the icons appear a little bit larger, but then this dude with normal sized fingers is tapping on an icon that his finger is only covering about a quarter of. Yes, we’re going to see a retina display on the iPad 3. No, this photo isn’t one, unless of course Apple has started using toddlers as hand models. My guess is that this is just photoshopped together for the purposes of the invite.

What of the other rumoured improvements? HD upgrade for the front-facing camera? Upgraded back camera to match the iPhone 4S? I think both of these are covered by the same issue. Space. If the leaked photos are anything to go by then the iPad 3 is only very, very slightly thicker than the iPad 2, I don’t think this is going to allow enough room for ‘better’ cameras, especially given talk that the extra width was to allow for a bigger battery required to power the retina display everyone is craving. I’d like to see a camera upgrade, but I won’t be massively shocked or disappointed if it doesn’t get one.

Keeping expectations low is always going to be better.

I’ve seen a couple of people mention that they think the software (OS and core apps) is going to receive some changes. For the most part I doubt it, at least for the initial launch. Sure they might give a sneak peak at what they might be looking at for iOS 6 when it drops later in the year, but I don’t think that any major changes will appear in iOS 5.1 … with one exception of course.

Siri. Right now Siri is only available on the iPhone 4s, this is the first iPad update since the 4S was released so it seems more than reasonable that Siri is going to make an appearance. Personally I haven’t played with Siri (don’t have a 4S), and I think even if I did has a 4S I’d probably play with Siri for a week and then just go back to using my phone as I would normally. Still seems too much like a novelty item to me.

The internals will no doubt get a boost, the inclusion of a quad-core processor and 4G LTE seem to be the most expected improvements. RAM will probably get/need a boost to deal with the plethora of extra pixels that need to be driven - another reason why the quad-core processor rumour seems reasonable.

What else? There’s always a ‘what else’.

People are starting to talk about the possibility of an Apple TV update accompanying the iPad 3, with a feature bump to enable 1080p mirroring. I don’t mind the logic behind it, whether Apple is going to drop two new products at once is the question. They may prefer to keep all the attention squarely focused on the iPad 3.

On the other hand, to Apple, a minor spec bump might be a worthy ‘one more thing’ when paired with the freshly revealed iPad3. We’ll just have to wait an see.